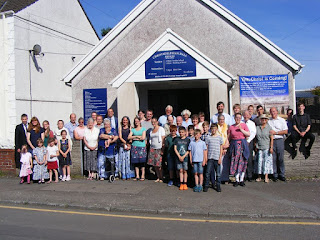 We are a group of Bible believers who meet up in Gorseinon. We base our beliefs solely upon the Bible and try to live our lives in accordance with God's will. We look forward to the return of our Lord Jesus Christ to this earth, to set up God's Kingdom as promised, when the whole earth will be filled with peace for ever and ever.


How long have Christadelphians been around?

Historians (see Alan Eyre’s book The Protesters) have traced small groups of believers, who have shared these Bible beliefs, down through the centuries - especially since the reformation. The scientist Sir Isaac Newton, the philosopher John Locke, and the translator of one of the first English versions of the Bible, William Tyndale, all believed very similar doctrines to the Christadelphians. In fact, as we share the faith of such Bible worthies as Abraham, it can be argued that Christadelphians have been around for thousands of years, though obviously not under the same name.

What does the name Christadelphian mean?

The name "Christadelphian" means brothers and sisters in Christ. We share the beliefs of Jesus and the apostles, as our beliefs are based solely on what the Bible teaches.

Where does the term Christadelphian come from?

Do Christadelphians have a founding member?

Not exactly, because we look to Jesus Christ as our founding member. However, you may be interested in the following information: In the nineteenth century Christadelphian meetings sprang up rapidly in Britain, America and throughout the English-speaking world. This was largely due to the preaching of a medical doctor, John Thomas. He was sailing from Britain to America, in the capacity of ship’s doctor. During this Atlantic crossing the ship was caught in a storm, and - as do many of us when we’re in danger - he prayed that if God allowed him to live, then he would find out what the Bible really said and try to live by it. He did exactly this. As he studied the Bible he began to speak and teach about what it said. Soon many were brought back to Bible Truths (such as the return of Jesus and his establishment of The Kingdom of God on Earth) from which many orthodox churches had strayed. However, even though many present day Christadelphians "are what they are" as a direct result of John Thomas’ preaching, he cannot really be said to be the founder member of Christadelphians. This is because people have adhered to the same beliefs down the millennia, since the time of Christ and even before that. He can be said to have "re-discovered" the Truth which has always had many faithful followers. Interestingly, many groups and individuals have simply read the Bible for themselves, and discovered its truth on an independent basis. They have then come into contact with Christadelphians, and joined our members. This is a powerful witness to the fact that we simply believe what the Bible teaches.

What do Christadelphians believe?

For an answer to this question go to our Beliefs page.

Do Christadelphians have priests or a paid clergy?

No. It is clear from reading the New Testament, that the first century ecclesias, or churches, simply elected a small group of overseers. Each ecclesia, whilst sharing a common faith, made its decisions democratically and independently. Indeed, the book of Hebrews clearly shows that true believers only have one high priest: the Lord Jesus. We follow these biblical practices. See Do Christians Need Priests? for further information.

How many Christadelphians are there worldwide?

What sort of activities do Christadelphians run locally?

See our What's On page and please feel free to Contact Us with any other questions or comments.

To find out more about our beliefs, you could visit the Christadelphian Office website and download some free literature to read.

You could sign up for a free Online Bible Course to help you learn more about God's Word.