A Sure Word of Prophecy

A large proportion of Bible content is prophecy, much of which has been fulfilled in precise detail, often against all human odds and expectations. This striking fact places the Bible in contrast to the attempts of human beings, such as Nostradamus, to predict the future. Fulfilled prophecy is powerful evidence that a supernatural God exists, who can not only predict the future, but actually controls the future. This is His claim in Isaiah 46v9-10 (ESV):

One of the most remarkable prophecies is found in Daniel Ch. 2, describing a dream experienced by Nebuchadnezzar, the powerful emperor of Babylon around 600 BC. Over 2,500 years of world history in advance is depicted in an image of a human body comprised mainly of different metals. 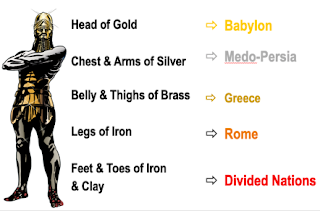 The interpretation, given by God through the prophet Daniel is illustrated in the diagram. The metals stood for the succession of powerful empires that would particularly affect the history and destiny of Israel. History testifies to the uncanny accuracy of this prophecy.

The image was destroyed by a stone which struck the image on its feet, pulverising it into fragments blown away by the wind. The stone then grew to fill the whole earth.

The interpretation of this detail is startling. The stone represents the return of the Lord Jesus Christ, who will displace all human governments and set up the worldwide Kingdom of God on earth. The fulfilled part of the prophecy is an assurance that the return of Christ is soon to become a reality.

"The God of heaven will set up a kingdom that shall never be destroyed, nor shall the kingdom be left to another people. It shall break in pieces all these kingdoms and bring them to an end, and it shall stand forever… The dream is certain, and its interpretation sure."  (Daniel 2v44-45, ESV) 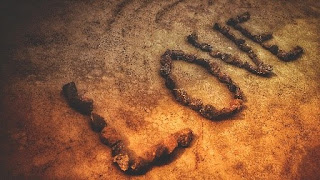 The origins of Valentines day have been lost in the mists of time but still it remains with us for better or for worse as a celebration of all things romantic, an opportunity to profess our love for our significant other or a cynical commercial ploy depending on your point of view.

What is much clearer is the emphasis on love in the Bible.  Time and time again love is described in scripture as the pinnacle of Christian endeavour, the thing to aim for above all else.  It is the first and second greatest commandments, as defined by the Lord Jesus himself when questioned by a lawyer:

Of course, the kind of love being described here is not of the hearts and flowers variety, it is what is sometimes called “divine” love, or “agape” love (from the Greek word it is translated from in the New Testament, as opposed to “eros” which refers to what we might want to politely call “romantic” love)

Jesus tells us to show this sort of love to everyone, including most famously our enemies.  He says:

“So whatever you wish that others would do to you, do also to them” Matthew 7v12 (ESV)

This “divine” love is so called because it is something that God Himself has.  In fact, it was His love for humanity which motivated Him to send his only Son to die so that we could live, as this most well-known of Bible verses says:

“For God so loved the world that He gave His only-begotten Son, that whoever believes in Him should not perish but have everlasting life.” John 3v16 (MKJV)